I’m keeping a close eye on the Harbor Seals from the Alsea Bay Bridge, Waldport, Oregon.

There is lots of activity out there!

Harbor seals don’t have much contact, other than during mating season and pre-pupping season.

I have never seen them move so fast on the sand before.  They would dart out of the water to shoot up onto the beach.

One might interact for a minute with another on-shore.  Then dart back into the water.

Harbor Seals usually keep space between them when hauled out; whereas Sea Lions lay all over each other. 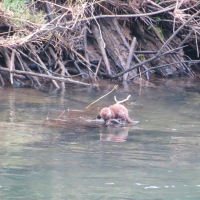