We drove south-west from Brazos Bend State Park, near Needville, TX, along Hwy 35.  Goose Island State Park is near Lamar, TX, on the other side of St Charles Bay from Aransas National Wildlife Refuge.  It is a busy park, especially during Whooping Crane (and snowbird) season.  We were able to get a campsite (in the woods) for one night but they were reserved after that.  Fortunately, there were a couple sites available on the beach after the first night.  That’s where we wanted to be anyway.

The campsites are right on the bay!  We were in Trout Loop which is walking distance from the fishing pier.  They were catching sheepshead, which look like a flounder but the eyes are on either side of the head instead of one side.  They said you have to use live shrimp to catch them so Don asked if I’d resuscitate his dead shrimp for him.  Although the fishing wasn’t that great, the birding was!

This is the closest we’ve been to a Great Blue Heron.  They are big birds!  We watched one picking out sticks for his nest.  He’d pick up a stick and throw it in the air a couple times to test it’s strength (according to one of the campground “Bird Hosts”). 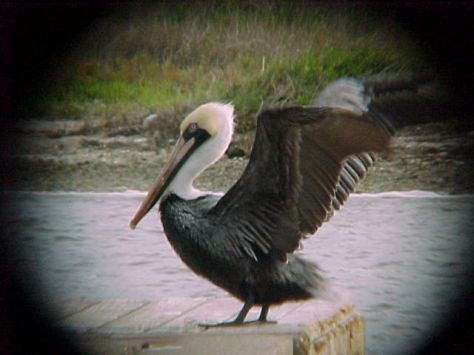 There were lots of Brown Pelicans around.  They live here year-round.

I had no idea that, other than a flamingo, another  pink bird existed until I saw a picture of the Roseate Spoonbill in the State Park office.  They are a beautiful, bright pink.  They are very camera shy and we need a better camera to capture the color!

Okay, so rumor had it that some whooping cranes had been seen over by the “big tree”.  This is a huge oak tree that is recorded being over 1,000 years old!  Pretty impressive!  We saw some deer wandering around here but no whooping cranes.  However, a private property owner nearby, has a feeder in his yard, which is where the whooping cranes were actually seen.  So we went exploring a little further.

It was about 4pm when we saw 2 whooping cranes by the feeder.  We couldn’t get close enough to get a good pic of them.  But we went back, about the same time the next day, and saw 4 in the shallows of the bay.  Whooping cranes are also huge birds!  It was very fun watching them. 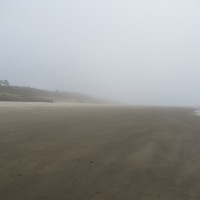